It has been a busy few days in Beni. The team that I am working with here, REACH Italia, have a full itinerary for me to visit as many orphanages, schools and clinics as I can before I leave for Bunia on Monday. It turns out that there are 4 orphanages in Beni that have between 16 - 28 children each, some as young as 4 month old babies up to 16 year olds. There are also lots of schools and clinics that support these orphans and other vulnerable children.

On Wednesday after writing my last update we spent the afternoon visiting 2 of these orphanages and a few different schools and clinics. One of the orphanages is one that my friend Kathryn from America has visited before which is run by an incredible woman called Mamma Noella and the other is run by a sister from the catholic church. The 2 orphanages are very different. The one supported by the church has mosquito nets, the children are well dressed and seem happy and healthy. They have lots of beds in a big, clean building and there is a clinic on site. Most of the funds for this orphanage come from a catholic church. It was lovely to get the chance to visit this orphanage as the children were so happy and they all ran at me and jumped all over me which was a nice change as many of the children in the Congo (as well as the adults) don't seem to know what to make of me and even when I say "Jambo" to them and smile they just stare at me or worse, they run away!

The other orphanage was very different. It currently has 18 children sleeping in a house with only 7 beds. No bed nets, very little food and some of the chidden are clearly not in the best health - the youngest seem dazed, unhappy and just sit very quietly. Maybe they were just scared of me too! One of the little girls has a medical condition that prevents her from being able to stand although she is able to sit by herself. This was very distressing to see and I asked if she had been seen at the clinic and was told that she had but that she needed to go to the hospital but that cost money which they don't have. Mamma Noella is doing incredible work here with very little funding although these children clearly need as much help as we can provide.

So the next day we spent the morning in the market. I spent over $120 on 100kg of cassava for them to make bread, 30kg of rice, 20kg of beans, 10 litres of cooking oil, 3 tins of milk powder for the babies and about 100 bananas as well as some soap for washing. On the way to deliver this to Mamma Noella we visited 2 other orphanages. One is run by another amazing woman called Mamma Monique who looks after 26 children. 14 young children that live in her house and 12 older children that live in a house next door. Her children seemed happy and healthy although the bedrooms were all in a terrible state - 2 or 3 children to a bed and all needing new mattresses and mosquito nets. The other orphanage run by an old man called Siwako and his wife Margaret is similar in that there are often 2, 3 or even 4 children sharing a bed, many don't have mosquito nets and some children even sleep on blankets on the floor. Luckily I have over 100 nets coming from Nairobi soon so I can give some to each of the orphanages and I'm trying to find a way to get cheaper mattresses as I was quoted $25 per mattress at the market this morning which is crazy as they are literally a 2 inch strip of foam covered in a thin cloth.

After visiting all these places came the fun part and around 4pm we went back to Mamma Noella's place and delivered the food supplies. I also gave her some mosquito nets so the children wouldn't catch malaria when they are sleeping and I gave them some of the clothes, shoes and toys that had been donated in the UK. This was definitely the best part of my trip so far. Seeing her face and the faces of the children when we gave them all these basic items was absolutely incredible and the reason why I put this project together in the first place. I also gave her and an older girl some head scarves and jewellery and she was so grateful. She just kept saying thank you, thank you, thank you and that I was a gift from God. Such an amazing day. The best part for me may have been giving the children the teddy bears and other cuddly toys that people donated as they were so excited by them and they just kept cuddling them! Normally it wouldn't be worth the cost to bring them as excess baggage but I took bigger boxes that were already at maximum weight with school supplies and filled them to the brim with stuffed toys. I'm so glad I had that idea now! 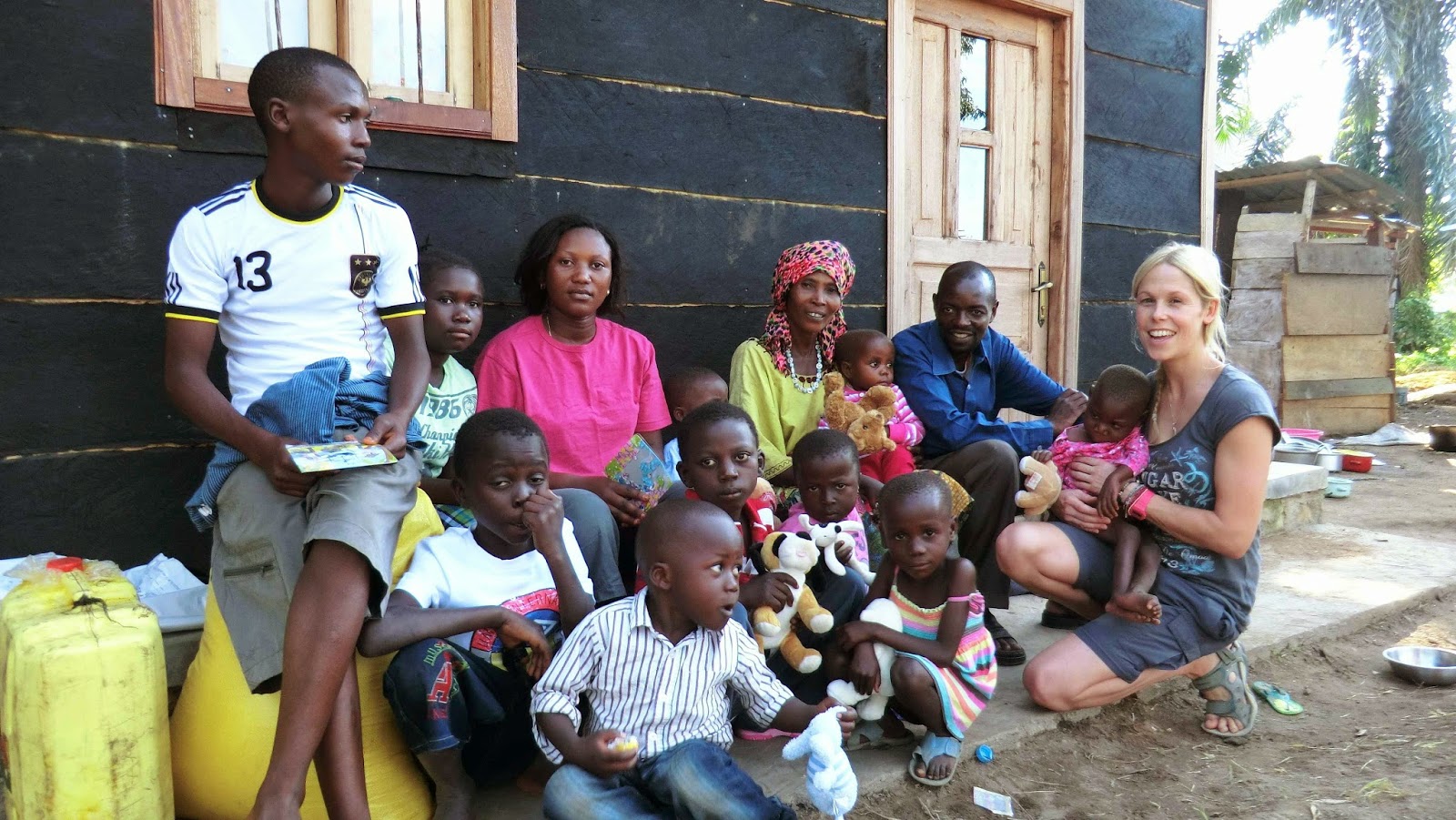 After Mamma Noella's we went back to Mamma Monique's and gave them some food and clothes too which was great. The children were so happy with their new T-shirts and shorts etc. Finally we went to the pharmacy and I spent $100 on medication for a clinic that had some children who were ill with malaria but couldn't afford treatment. Although this wasn't part of the original plan to help orphans I just couldn't stand by and watch these children suffer so I paid for this from my personal contribution.

Today we spent the day in a town called Oicha which was home to thousands of refugees from Bunia during the war in 2002 - 2006 and now has a group of Ugandan rebel soldiers living in the jungles nearby. Conflict in the area has left many people dead and there are now more than 400 orphans in the town. REACH Italia work with a local group here that support these orphans and widows of the war and I arrived to find at least 300, maybe more women and children in a huge church who sang for me as I walked up the isle to the front - an utterly amazing and incredibly emotional experience. 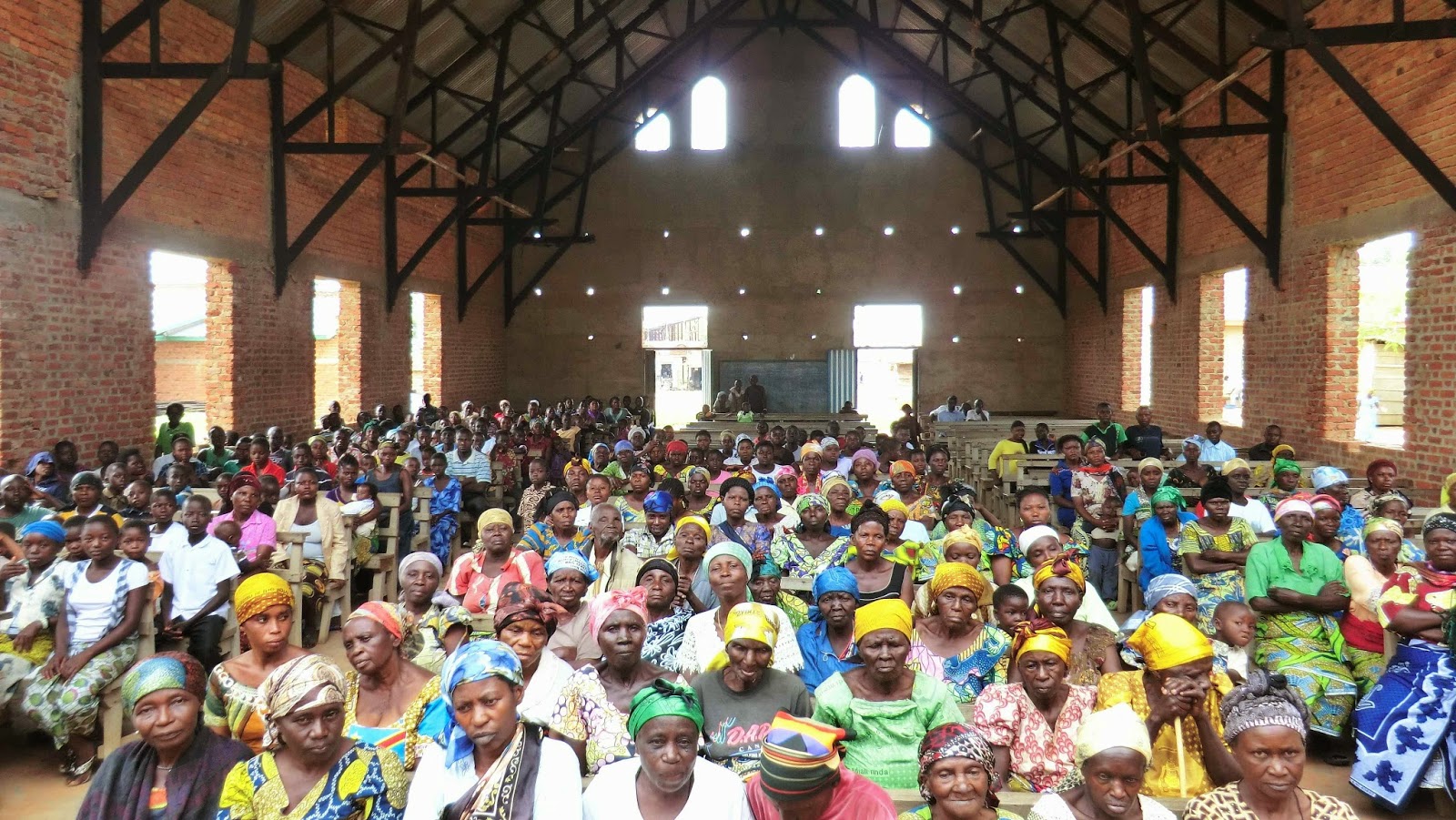 Most of the orphans live with and are supported by grandparents or other family members. There is 1 orphanage in the town that looks after the babies until they can be placed with family members. There were 5 babies living there when we visited today, looked after by Mamma Saambili but without any money she had very little food and almost no milk formula for the babies. So off we went to the market again where I gave her some money to buy basic items such as maize, beans, rice, oil, sugar and fish and I spent $60 off my personal money on 6 tins of baby formula. It is so difficult to only buy this much and know that before long they will need more but I'm also aware that there are many other orphans that need helping right now. 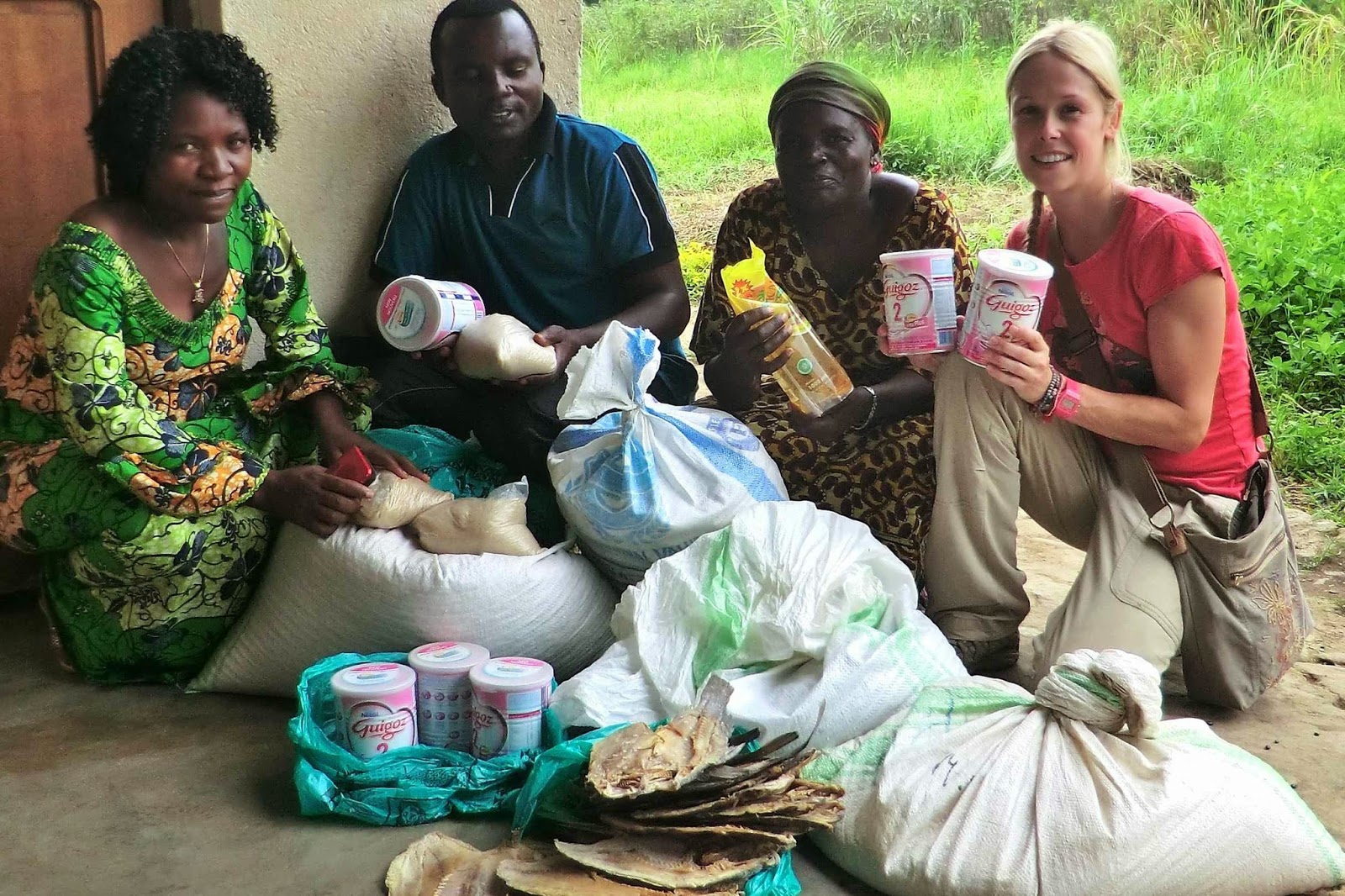 All in all it's been an incredibly busy few days in Beni - generally we're on the road at 9am and rarely back before 5pm but it has been well worth it to finally get to deliver supplies to the orphanages and deliver medication to sick children. It's so nice to have finally settled in and get into a bit of a routine for the work I'm doing here. Everyone is so lovely I've already forgotten that this is supposed to be one of the most dangerous places in Africa until I see a big UN tank drive past and then I remember! I have my own driver, Joseph, who drives me everywhere (while listening to the best music collection ever including his 'Best of Celine Dion' CD!! I make him come and eat dinner with me which I share with him along with a beer as it feels weird to eat and drink alone while he waits in the truck, plus it is a good excuse for me to practice my french. During the day I also have a translator that comes everywhere with me called Elvis and I always share my breakfast with him in the morning and some biscuits at lunch time otherwise he doesn't eat all day.

Well that's about it for my little adventure so far. I'm exhausted both physically and emotionally but I am safe and happy and really enjoying what we are achieving here. Here is a photo of the twin babies at Mamma Saambili's orphanage that I bought the milk for... 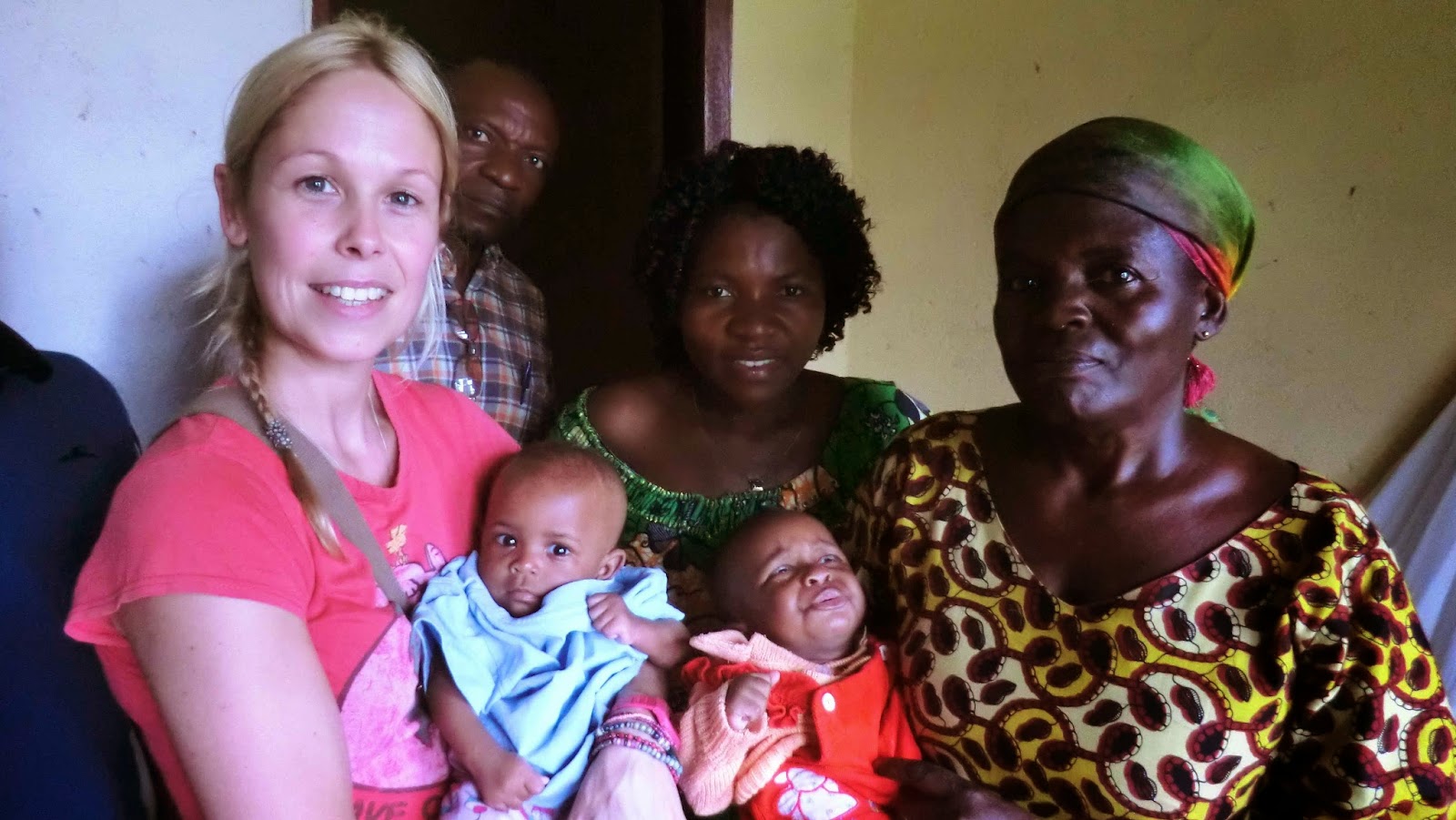