Today I took a rare day off and headed west out of Bukavu deep into the forests of Kahuzi-Biega National Park. This huge park is home to the largest gorilla subspecies in the world - the Eastern Lowland gorilla - and unlike the mountain gorillas that are regularly seen by tourists in Virunga and Bwini National Parks across the border in Uganda and Rwanda, these Eastern Lowland gorillas are only found in the Congo and due to the war which has ravaged this part of the country for the last 15 years, very few tourists get to see them.

Thanks to my new friend Kathryn in the states who knows the director of the park, I was given a private VIP tour to see these amazing gorillas up close and was even joined by a French biologist who works for the Dian Fossey Gorilla Fund and has been studying gorillas for 11 years so was able to answer all my questions. The tour should have cost around $400-$500 but thanks to Kathryn and her friend the director my trip was free! (Although I did make a generous donation to the park and gave all my guides hefty tips). 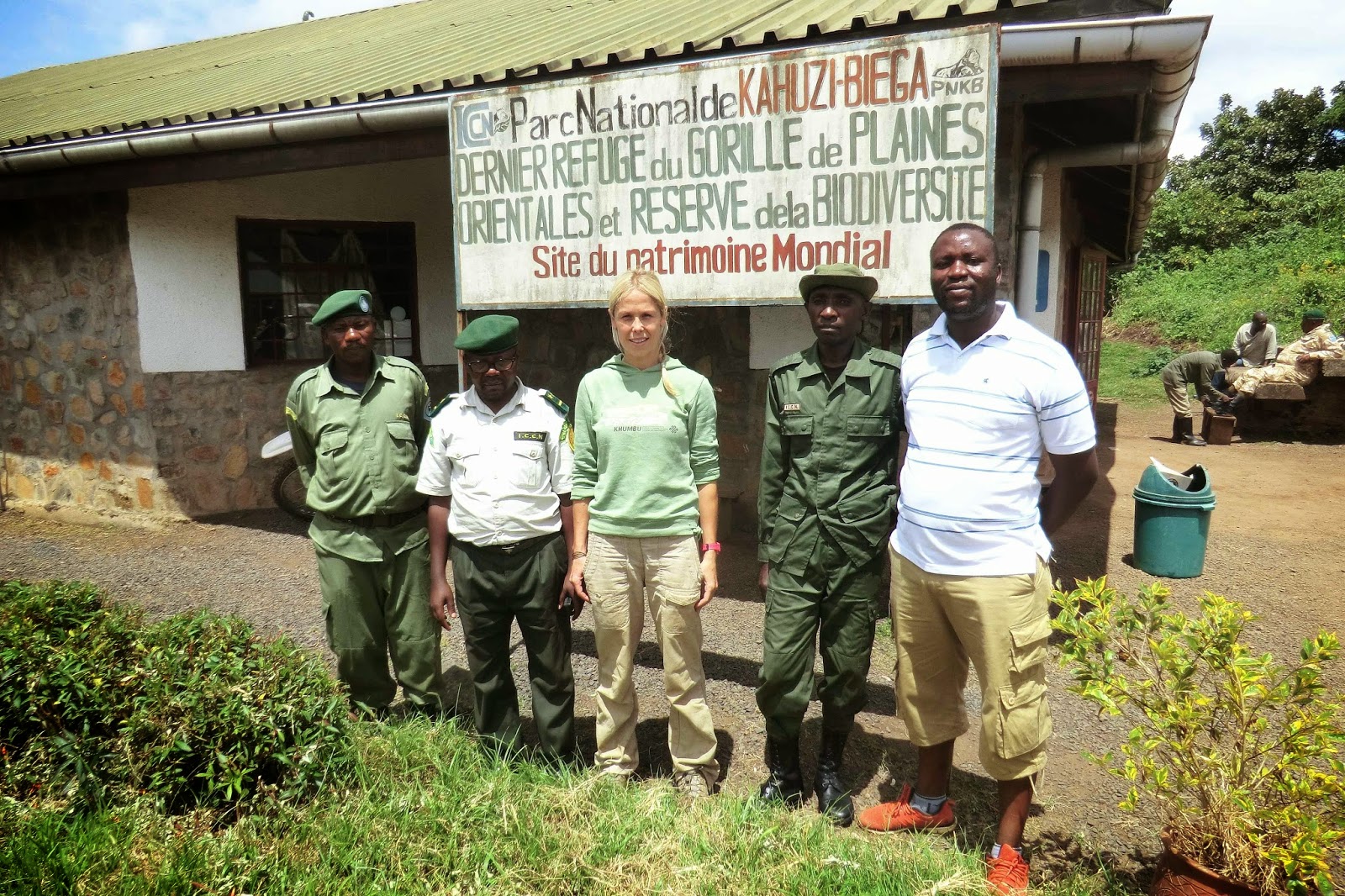 We started off by driving up into the hills on the main tracks through the park and then turned off onto a much smaller, almost non-existent trail for a while before it was time to get out of the vehicle and begin the hike that would take us to the gorillas. Because the rangers try to find them every day, they always have a general idea of the area that they were last in. One of our rangers was a pygmy who knew these forests well and with the help of his machete tried his best to clear a way through the dense forest. After an hour of literally wading through a sea of vegetation, dripping with sweat, a million flies around my face and a million ants trying to crawl up my legs I heard the rustle of leaves in a nearby tree and the low grunts that are so characteristic of gorillas. I was so excited that we had found them I could barely contain myself! 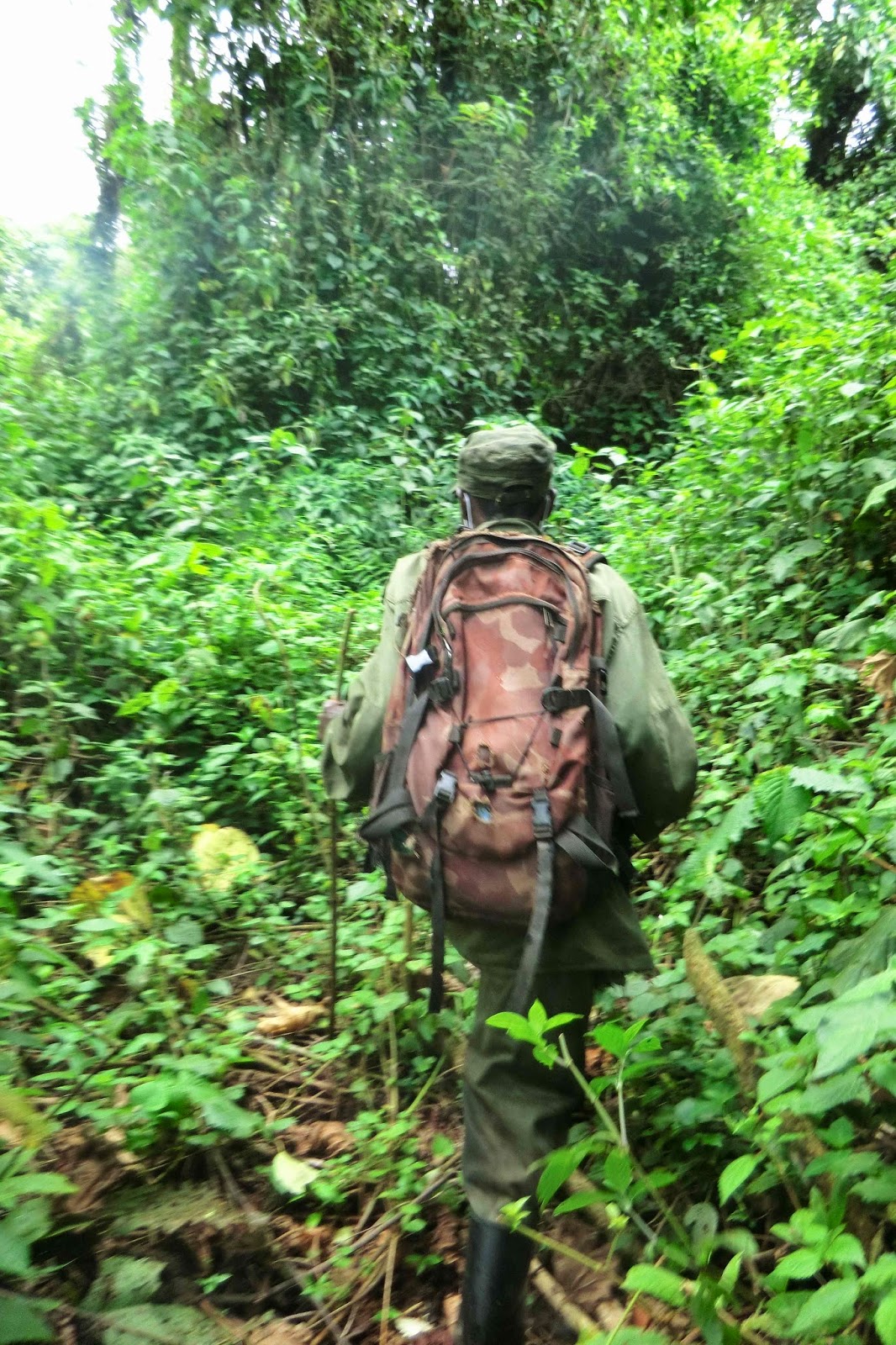 As we continued to slowly make our way towards the sounds I looked up and spotted a young female gorilla up in the trees eating leaves. Then a saw a baby hanging down from the tree and as I inched closer I realised that at the bottom of the tree almost completely obscured by the plants that he was eating was the biggest gorilla I have ever seen - the silverback. The rangers continued to use their machetes to clear the area in front of him so we could get a better view and when I finally saw him I was literally speechless. After dreaming of seeing gorillas in the wild since I was a little girl, here I was standing a mere 5 metres from a huge male silverback gorilla. 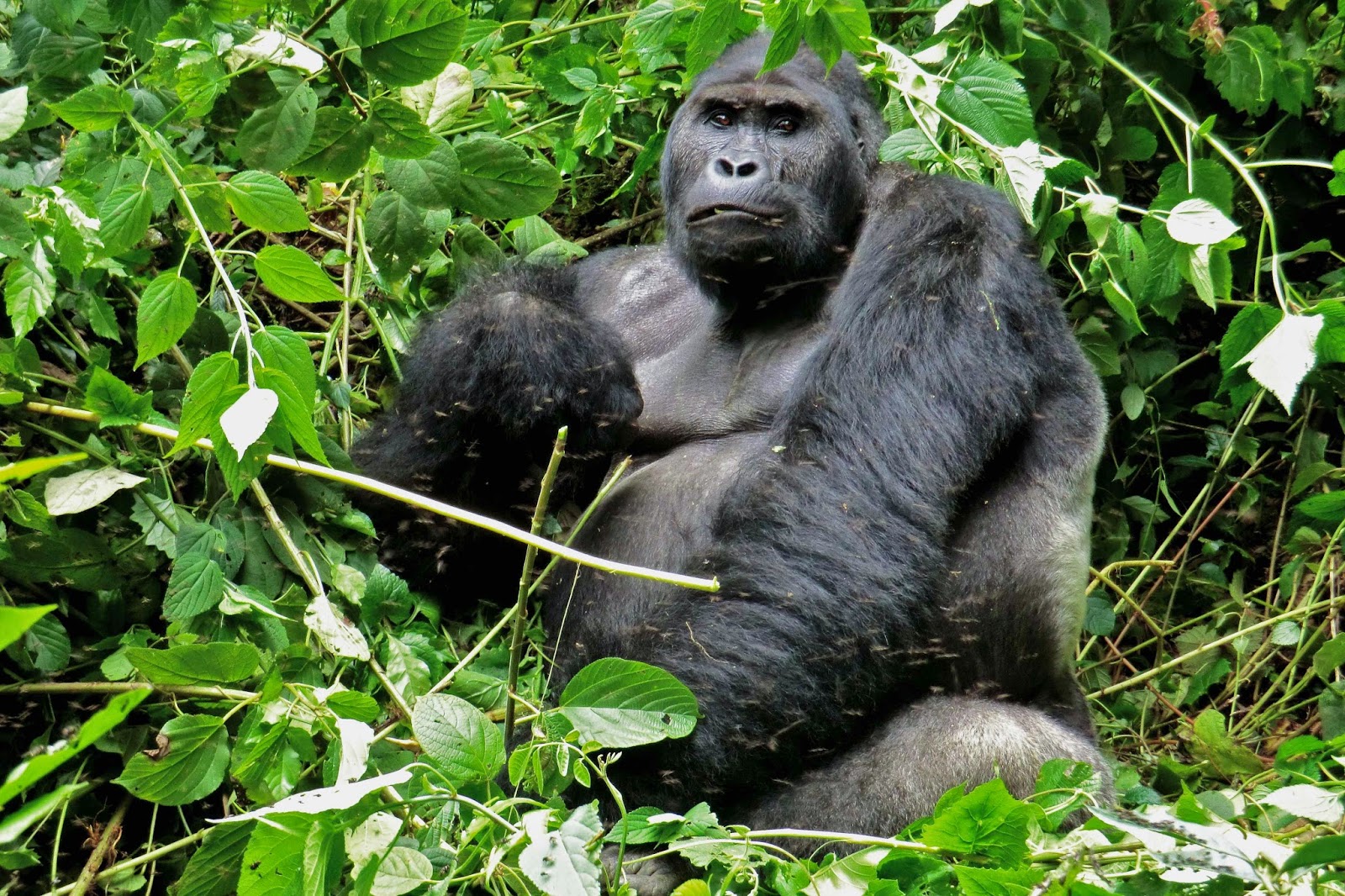 I was amazed at how happy he was to have us so nearby. He showed no signs of feeling threatened and just continued to sit and eat his lunch! Unlike the Western lowland gorillas that lived in the rehabilitation centre in Cameroon who wouldn't make eye contact with you, this gorilla would regularly look over at us and stare before looking away and grabbing another handful of leaves.

As we slowly moved away from the male I realised that there were many more gorillas around him but that they were just really hard to see in the thick forest. I saw at least 3 or 4 females, a few juveniles and even some little babies. The biologist studying them told me that this group has around 25 gorillas although there is only 1 male. The rest are his harem of females and all of his children. 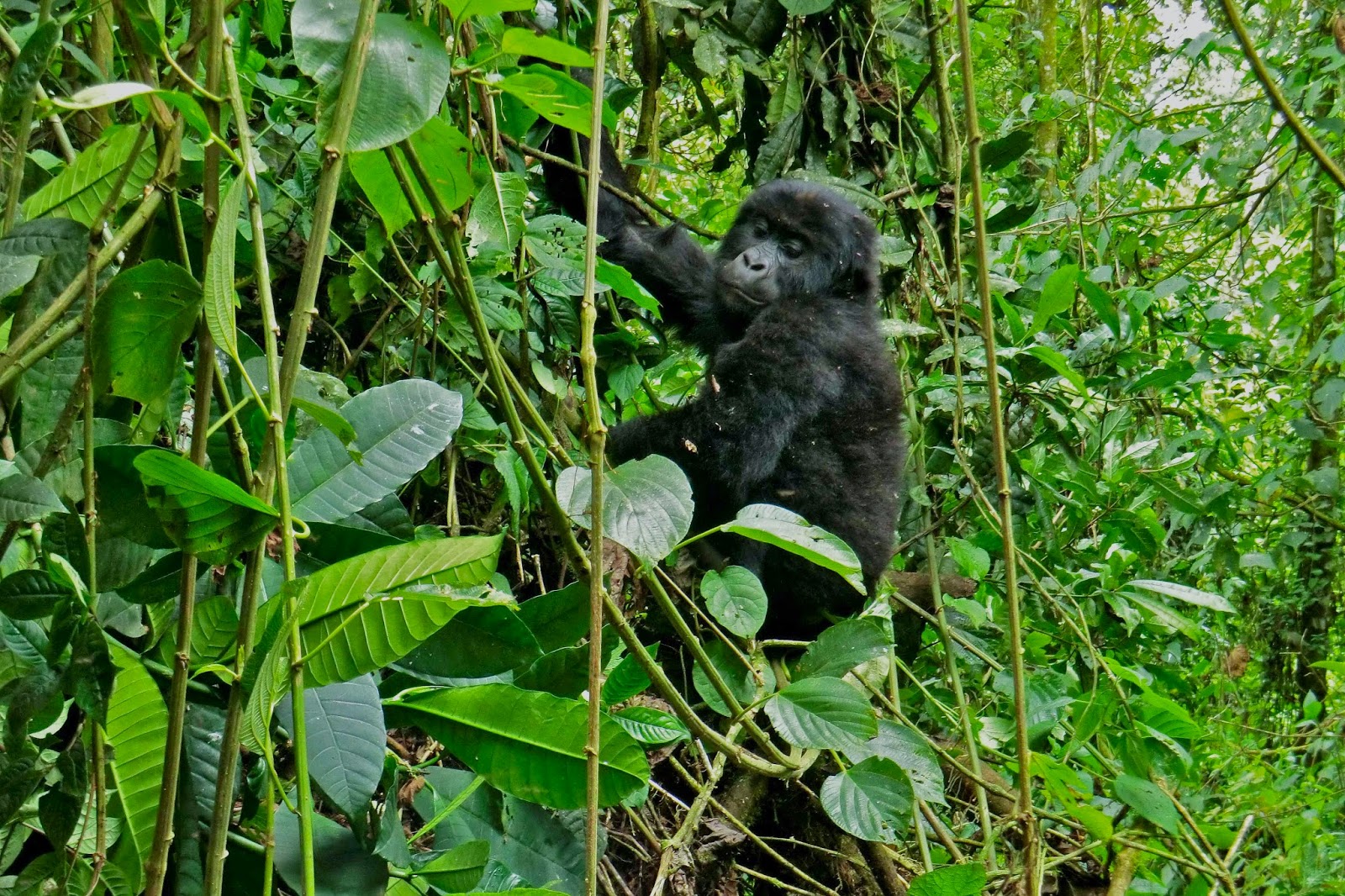 One tiny baby, the youngest in the group, was sat very close to the large male which is unusual in gorilla society as they don't normally tolerate that. The biologist told me that the baby's mother died last year when he was less than a year old and they thought he might die without his mother's milk. He now spends all of his time close to the silverback who seems to be looking after him and he is doing well on his new diet of plants and fruits. (Unfortunately you can't see the baby very well in this photo as he is so small but he is the patch of black obscured by vegetation on the left of the photo!). 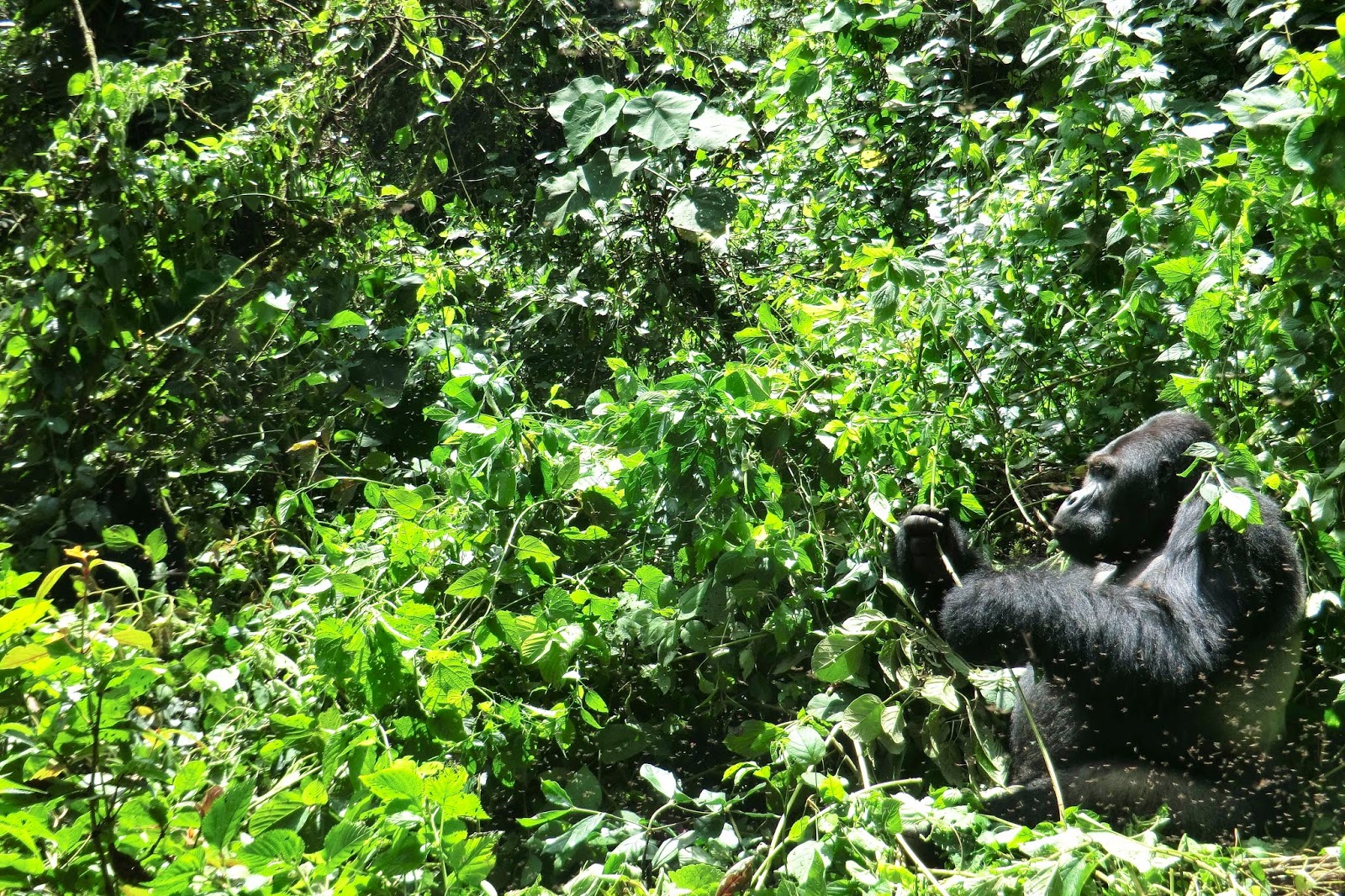 After an hour or so of sitting and watching these amazing animals it was time to leave them and make our way back out of the forest. I was grinning like a cheshire cat the entire way as I still couldn't believe that after years of wanting to see gorillas in the wild my dream had finally come true. Best day ever! :-) 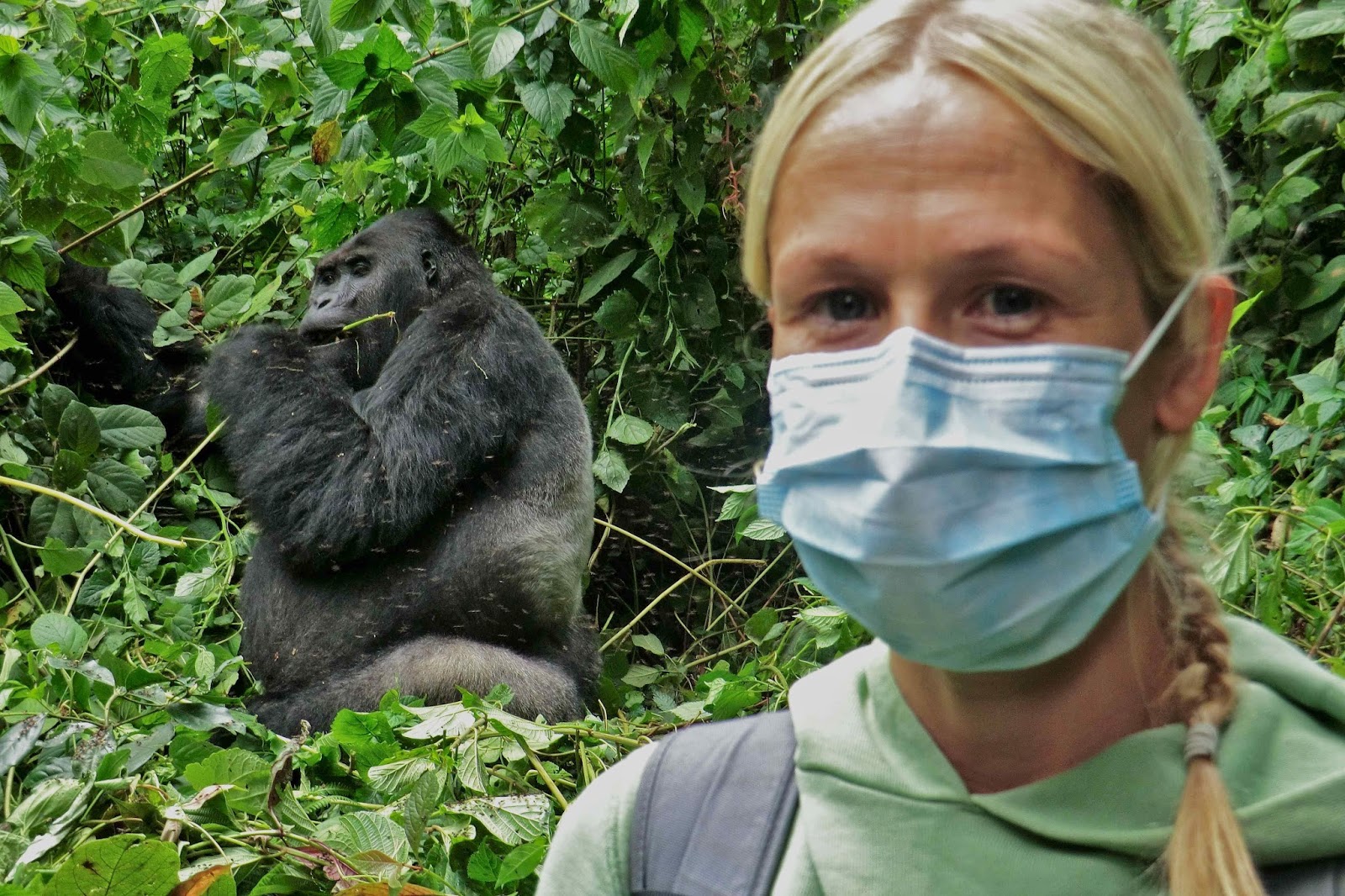